Daily Science Fiction‘s featured story for today is “Kill Switch.” Check it out if you’re in the mood for a flash tale of biotechnology, professionalism, and evil.

I made my first sale to a pro market this week. I am incredibly pleased.

Obviously, money doesn’t equal quality, “pro rates” are still laughably low, etc., etc. But what I write is largely recognizable as belonging to commercial genres, and well-resourced publications attract talent. Making it to the second round of consideration in pro magazines I enjoy was a nice ego-boost last year. Clearing that final hurdle is an even bigger one.

My short story “Changeling” will be published in Corvid Queen next August. I have a soft spot for folklore, count myself a feminist, and think corvids are pretty cool, so I’m pleased a story has settled here. 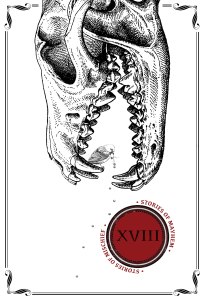 I’m very pleased to announce that my story “Like Gold Upon Her Tongue” will appear in the anthology Eighteen (XVIII), edited by Mark Teppo and scheduled for publication by Underland Press in March 2020.

The book is part of the Underland Tarot series and promises stories of mischief and mayhem. The anthologies draw their themes from the Major Arcana; the eighteenth card is the Moon. The cover (which I adore) is an in-house Underland design based on a concept by Jennifer Tough. (She did the also-striking artwork for XIII, the first in the series, taking the Death card as its theme.)

I am quite fond of autumn. I like the cooler weather—jeans-and-tee-shirt weather, light jacket weather, cardigan or sweatshirt weather. Today, however, it made it up to 90° (or so close as to make no difference). Following last Friday’s Climate Strike, today’s heat fills me with the impulse to despair and/or (metaphorically) burn something down.

The leaves aren’t turning yet. That’s an October thing, though the number of crunchable leaves on the ground has increased. In lieu of brilliant foliage, I instead give you a picture from the final days of summer: Canada geese in flight at twilight. The blurring almost manages to look artistic, rather than an artifact of a poorly-lit motion shot taken with a years-old smartphone.

I have a pile of WIPs that I’m actually going to submit at some point. I chose this year, when I have taken a science fictionally significant number of spins around the sun, as the year to start sending them out. In the spirit of New Year’s Resolutions, I also spun up this site and a few social media accounts. This means that whenever I do have something published, there will be some amount of content already in place. More importantly, it means I will have already done the administrivia of setting things up and gotten that flavor of distractability out of my system. (Or so I tell myself.)

At the moment, Twitter is mostly for following a few authors, with some retweets and original tweets. I’ve been on Twitter for a number of years, but when I started I vowed that I would follow folks in just a few fields. I stuck to that and I think it was a good plan. So the second account is not cheating, it’s just replicating the strategy for a different field. (Or so I tell myself.)

I’m using Dreamwidth as a place to dump selected progress updates. I keep more meaningful logs elsewhere—word counts, notes about what I’m working on, brilliant thoughts to incorporate, that sort of thing. But as the journal is public—albeit uninteresting to anyone who is not me—it may serve an accountability purpose. (Or so I tell myself.)

Anyway, that is what I am currently doing, and why I am doing it even though no one is watching.

I am not currently planning on long form blogging, nor do I expect much of anyone to stumble across this site for a while. (And, frankly, my eventual traffic expectations are rather modest.) But it seems a shame to let a new site languish entirely, so here at least is a day one post.